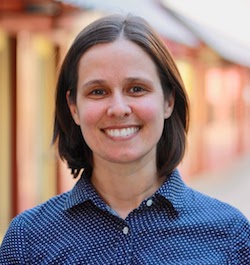 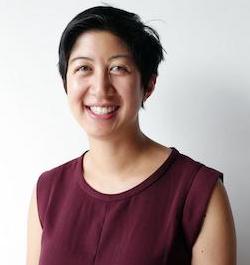 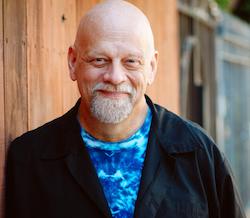 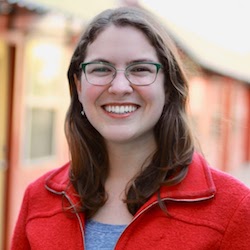 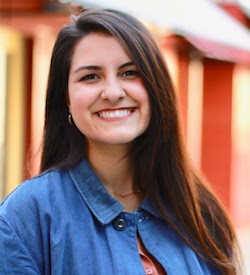 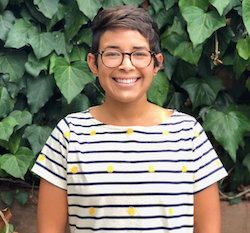 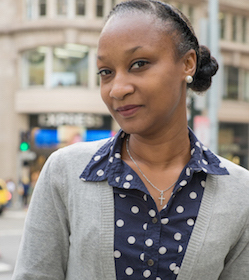 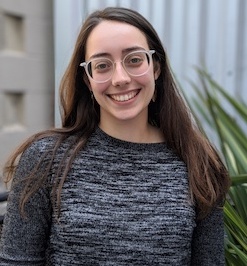 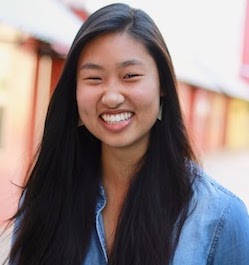 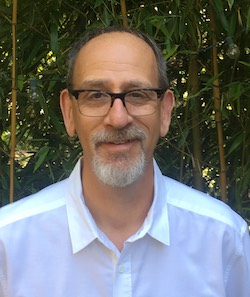 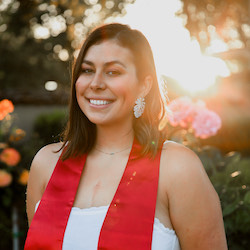 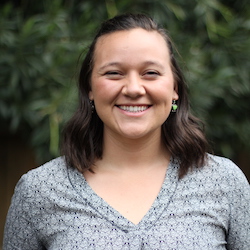 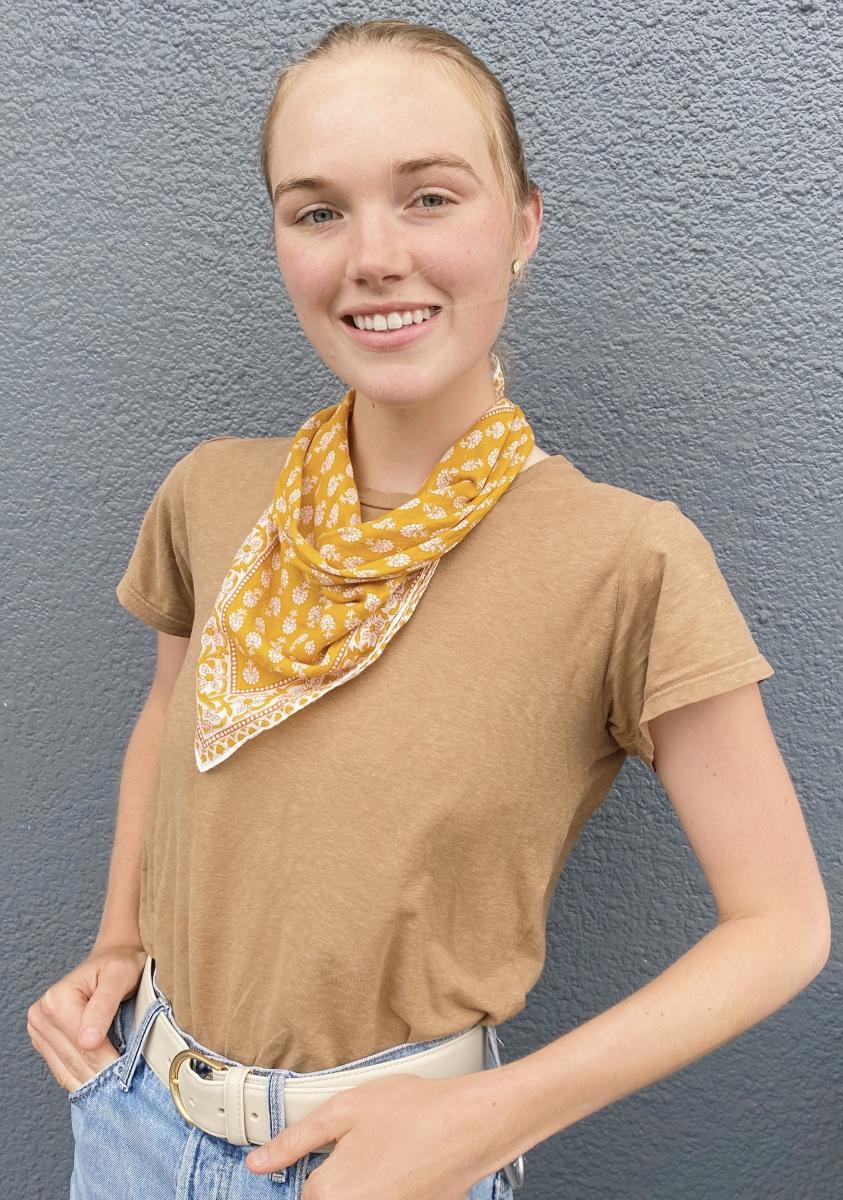 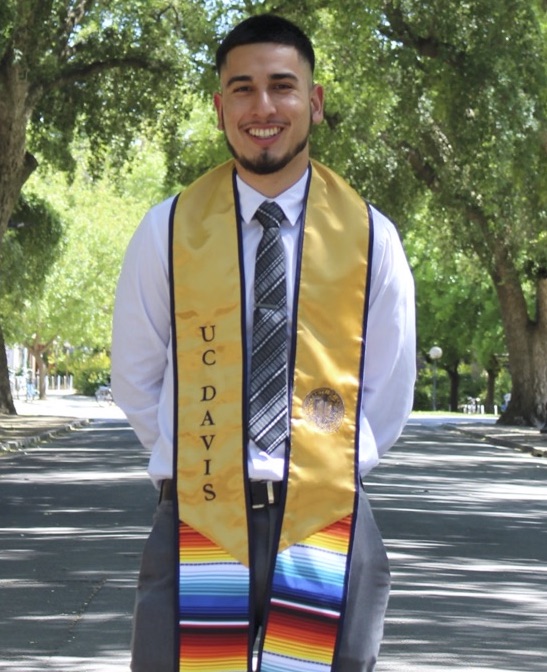 Sarah has worked on food-related projects in the Bay Area since 2008. She launched Cooking Matters in the Bay Area in 2010. In her previous work with Bay Area farmers' markets, she created the Bay Area’s first Market Match program, which gives farmers’ market customers who use food stamps extra funds to spend at the market, and a Veggie Rx program that helped diabetes patients increase their produce consumption while measuring positive health outcomes. In her youth, she taught yoga and guided bicycle tours in France. In 2011, she founded the nonprofit Three Squares, which merged with 18 Reasons in 2013. She is passionate about cooking, rock climbing, riding her bike, and, yes, her job. She lives in San Francisco. Contact her at sarah@18reasons.org.

A native of Virginia, Theresa's curiosity in food was nurtured by her family, which includes talented cooks, farmers, gardeners, and fishermen. When she moved to the Bay Area in 2013, Theresa became a passionate volunteer with both our 18th Street Kitchen events and Cooking Matters program. She joined the team full time in 2015 and is eager to have everyone walk through the doors of the 18th Street Kitchen and feel connected to their neighbors, friends, and food.

When not in the kitchen or at the farmers' market, you can find Theresa reading at Ocean Beach or getting lost in museums. Contact her at theresa@18reasons.org.

Born in the Haight Ashbury neighborhood of San Francisco, Mike grew up in suburbs of San Jose, where he discovered cooking as his first profession and lifetime passion. After wandering through typical teenage jobs at pizza joints and ice cream parlors, Mike’s first “restaurant” job was with Sambo’s Coffee Shops, slinging hash and cooking eggs for the bar rush and Sunday breakfast crowds. He moved on to help open several restaurants, attend the California Culinary Academy, and study under European chefs with Michelin backgrounds. Later, Mike served as an executive chef for catering companies, wineries and country clubs. When his son was born, Mike transitioned his career into teaching, returning to the CCA where he eventually became the Executive Chef and Director of Academics. Having taught for Le Cordon Bleu North America, Mike is thrilled to return to teaching in a neighborhood-based community. When he is not teaching, he tends to his backyard garden, helps his wife to can and preserve food, and loves to cook for his friends and family. Contact him at mike@18reasons.org.

Allison became interested in expanding food access for immigrant communities while at Brown University, where she majored in Hispanic Studies. After graduating, she worked on a few small, organic farms, growing everything from melons to shiitake mushrooms, and ultimately relocated to the East Bay to pursue mission-driven work. In her role as the Director of Development and Communications at 18 Reasons, she explores her passions for teaching, learning, food, and community-building every day. In her free time, Allison likes to experiment with new recipes, dally in bookstores, and enjoy Bay Area backpacking. Contact her at allison@18reasons.org.

Claudia is a strong believer in the ideology that the kitchen is the heart of the home. Her Hispanic background fosters her love of food and culture, and she is especially inspired by the example set by her late abuelita of making home-cooked meals a priority. She completed her B.Sc. in Health Education with a Certificate in Holistic Health Studies at San Francisco State University where she spent most of her time researching issues surrounding food justice. During her time at SF State, she was part of the Community Food and Justice Coalition, where she conducted research on food policy and served on the planning committee for the All-In initiative working to end poverty in Alameda County. When she is not enjoying the company of her wonderful colleagues or class participants, you can find her trying out new recipes at home, practicing yoga, hiking, or on a fun road trip! Contact her at claudia@18reasons.org.

Rebecca is an Orange County transplant passionate about increasing access to healthy food and the power of sharing a meal. Growing up in an area dominated by chain restaurants, she began a knowledge quest to know everything about food during her time at Santa Clara University, where she studied Anthropology with a focus on Human Nutrition and Culture. After studying abroad in El Salvador with the Casa de la Solidaridad program, she returned to the states with a deeper understanding of the power of community and solidarity, which she took into her jobs within the food industry and eventually led her to serve a year of AmeriCorps at 18 Reasons in 2015. She is excited to bring her experience in cooking instruction, researching sustainable food systems, working in specialty grocery stores, and marketing to the 18 Reasons team and work towards a  healthier community. When she isn’t knowledge-questing, she enjoys reading, writing, cooking, ultra-distance trail running, and making new friends. Contact her at rebecca@18reasons.org.

Briana brings great passion for food and community.  She loves being able to teach others of all backgrounds how to prepare healthy, delicious meals.  Her appreciation for food and experience in culinary arts comes from growing up in her grandmother’s kitchen and graduating from the California Culinary Academy’s Le Cordon Bleu program.  She completed the Nutrition Assistant Certificate program at City College of San Francisco, and received her B.Sc. in Health Education from San Francisco State University. Briana’s favorite people to cook for are right at home, her three growing sons and her loving husband.  When she’s not cooking, you’ll find Briana exploring new restaurants, enjoying family and friends, or sipping on tea while scrolling through Pinterest. Contact her at briana@18reasons.org.

Francesca recently moved to the Bay area after completing an M.S. in food systems at the University of Vermont. There, she worked with the Center for Sustainable Agriculture researching child nutrition and dietary practices within refugee families. Now, Francesca is excited to share her love of cooking in support of empowering individuals and communities in accessing fresh, affordable, nutritious, and delicious food, and is looking forward to exploring her new home!

Born and raised in Colorado, Elise grew up in a family where knowing how to use a paring knife was more important than riding a bicycle. This sparked her passion for food and cooking at an early age, and she enthusiastically relocated to the Bay Area to pursue a BA in Nutrition Science at UC Berkeley. Outside of the classroom, Elise helped implement childhood obesity and exercise research with the Nutrition Policy Institute, and also worked as a pastry assistant to fill her free time with galettes and mousses. After graduation, she spent time abroad working on an organic farm where she gained an appreciation for the labor and commitment that goes into producing food everyday. Now, she is excited about being a part of 18 Reasons to merge her gastronomic backgrounds and to share her love of food with the Bay Area community. During the rare moments when she is not eating, Elise can be found trying out new sports, playing and listening to live music, or wandering the aisles of grocery stores and farmers' markets.

Tom was born and raised in Minneapolis, taking his first steps in the kitchen cooking family dinners in junior high school. His twisted career path began as a research director at a popular rock and roll radio station. This experience naturally led to a five year stint on the assignment desk in the newsrooms of the Twin Cities ABC and NBC stations. The next logical career step saw him open and operate Uptown Minneapolis, an alternative clothing and shoe store. After 11 years he sold the store, moved to the Bay Area, and made a career move to the nonprofit sector, working as a Senior Program Manager for CompuMentor (now TechSoup). Job responsibilities ranged from developing the organization’s website, redesigning programs for the Internet age, to leading their consulting program. In 2003 he co-founded Full Circle Projects, supporting the effective use of technology in organizations that serve patients in the health care safety net. Full Circle supported dozens of health centers, women’s health clinics, rural health centers, and critical access hospitals in the selection and deployment of electronic health records and patient portals. On weekends, Tom sold olive oil, balsamic vinegar, as well as his own cured olives at farmers markets. He remains a passionate and committed home cook.

Abby has always had a passion for eating good food, especially as a child when she would join her grandma and mom in the kitchen making classic Hawaiian, Asian, and Mexican dishes, a blend of her family's cultures. She recently graduated from Santa Clara University, with a major in Environmental Studies and minors in Spanish Studies and Sociology. She became interested in food justice and education her sophomore year, leading her to take opportunities as an environmental education intern in Kolkata, India and a food justice researcher in San Jose, CA.  In her free time, Abby loves to find new hiking and camping spots around the Bay Area and also works weekends at a floral shop in Berkeley.

Emelia’s interest in food systems began at a young age on the cattle ranch where she grew up. This interest persisted throughout college where she minored in Global Health and Health Policy, spending one summer in Kenya working on a project for preschool feeding programs and another in India researching the impact of vitamin supplementation on pregnant women. She found her passion for food service and community by managing the student grille in her college dorm. Last year, Emelia lived in Alaska where she worked for the Alaska Network on Domestic Violence and Sexual Assault and the Sitka Tribe of Alaska Tribal Court, spending her free time waitressing at a local seafood restaurant. 18 Reasons combines her interests in health equity, great food, and inspirational people! Outside of work, she loves cooking, eating, and sharing good food, riding horses, and spending time with her niece.

Anna roots her energy in building community and connection through the shared experience of food. She has a strong passion for and dedication to food justice and sustainability, which makes her role at 18 Reasons a dream come true! Anna earned her BA in Rhetoric and Gender Studies from Lewis & Clark College, and she spent a semester in Italy studying Food Systems and Sustainability (and also eating a lot of pasta). After graduating, Anna has worked as a winery apprentice in Napa, on an organic farm in Pt. Reyes getting her hands dirty, for an independent festival, and in marketing and data analytics. When she isn’t working or eating, she spends her time enjoying fresh air, teaching yoga, reading pretty much anything, and talking about what is for dinner.

Growing up, Mauricio was aware that diabetes was prevalent in his family starting with his grandparents' generation. When his father was diagnosed as pre-diabetic, his family altered their diet and lifestyle to support him. As his father’s condition improved, Mauricio realized the importance of a healthy diet to one's overall health. A couple of years later, Mauricio obtained his B.Sc. in Clinical Nutrition from UC Davis. As an undergrad, he was a part of the Knights Landing One Health Clinic and became its first Health Education Chair. Mauricio and his colleagues implemented the clinic’s health education program, which included providing an array of workshops for local patients such as cooking workshops. Mauricio notices many similarities between the places where Knights Landing patients live and his own neighborhood in Oakland, such as the lack of access to fresh food and health education resources. Through his work at 18 Reasons, he hopes to make a difference and ensure that these resources are more accessible to the people in his community. During his free time, Mauricio enjoys playing soccer, hiking, eating, and watching Grey’s Anatomy.